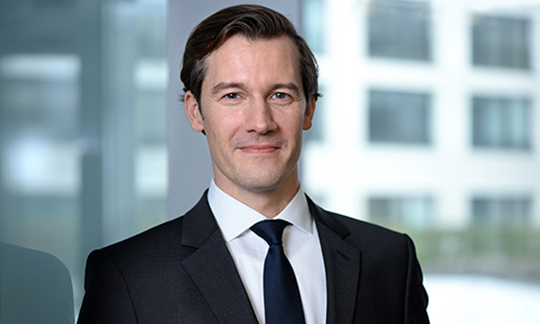 Dr. Walke studied electrical engineering, specializing in communications technology, at RWTH Aachen University, graduating with distinction as a Dipl.-Ing. in 1999. He continued with a doctorate at the Institute for High-Frequency Technology at RWTH Aachen University on the subject of space/code/time division multiple access radio systems, and obtained his Dr.-Ing degree with distinction in 2002.

In the same year he began his education in intellectual property law at COHAUSZ & FLORACK. After further educational stages at the District Court of Düsseldorf, the German Patent and Trademark Office and the Federal Patent Court, he was accredited as a German patent attorney and professional representative before the European Patent Office and the European Union Intellectual Property Office (EUIPO) in 2006. Dr. Walke has been with COHAUSZ & FLORACK as a patent attorney since August 2006 and became a partner in 2009.

Dr. Walke represents clients in all intellectual property matters. He has particular expertise in preparing and prosecuting patent applications (both nationally and internationally) and in invalidity proceedings, primarily concerning technically complex and standard-related inventions. Other focuses include patent litigation and acting as independent expert counsel for patent pools. Furthermore, Dr. Walke has extensive experience in supporting companies in their expansion of existing business fields and acquisition of new business units through freedom-to-operate searches and due-diligence evaluations.

His technical areas of expertise include information and communications technology, audio and video processing, data processing and software, cryptography and medical technology.

Doctorate at the Institute for High-Frequency Technology at RWTH Aachen University, graduated as Dr.-Ing.

Computer Implemented Inventions at the EPO and at the GPTO